VANCOUVER, BC, March 7, 2022 /CNW/ - MANTARO PRECIOUS METALS CORP. (TSXV: MNTR) (OTCQB: MSLVF) (FSE: 9TZ) (the "Company" or "Mantaro") is pleased to announce that it has completed reconnaissance mapping and sampling at the Golden Hill Property and has identified over two kilometers strike of additional vein structures.

Field work at Golden Hill was designed to identify, define, and test the gold grade of vein extensions and previously unsampled veins on the property. The sampling focused on the known prospects to confirm grade and outline high priority targets for the upcoming drill program. The program also aimed to extend the known mineralized trend along structure, resulting in the discovery of several significant new quartz mineralized zones.

The Company collected 500 rock chip samples across the Golden Hill Property. The results from this sampling will further define high priority targets ahead of drilling across historically mined veins at La Escarcha, Gabby and Garrapatillia. The results will also test the continuity of gold mineralization across vein extensions and prioritize newly mapped veins for additional exploration. Sample assay results are expected before the end of March 2022.

Dr. Chris Wilson, Mantaro CEO and Executive Chairman, ''The addition of the newly discovered veins north of La Escarcha significantly expands the known mineralized footprint on the property to over 6 kilometers strike length and represent attractive targets for more detailed exploration during 2022.  We are encouraged with the presence of visible gold in a number of rock chip samples.  This confirms the potential of high prospectively of the primary targets."

Golden Hill is centered on a broadly north-south trending regional structure (see Figure 1) that hosts the La Escarcha underground mine and the Gabby, Garrapatillia and Brownfields workings and gold-bearing veins in its western hanging wall. The same structure hosts numerous saprolite gold and hard rock gold deposits to the north and south of Golden Hill over a strike length of at least 25 kilometers — underpinning the significant control the structure exerts on gold mineralization. 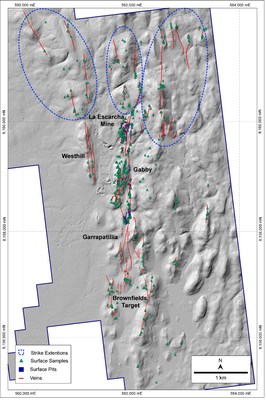 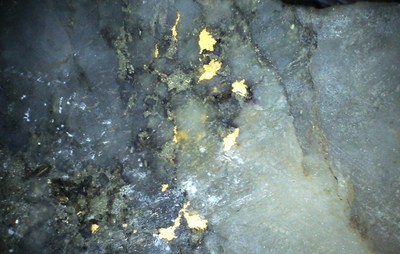 Second order faults splays host areas of alluvial and saprolitic/hard rock workings to the north of La Escarcha — where Mantaro geologists are currently rock-chip sampling and mapping. At least six strike kilometers of these structures are known within Golden Hill — in addition to the four kilometers between La Escarcha and Brownfields which have been mapped in detail. Known mineralization and surface anomalism is open along strike on all structures.

Veins are well exposed in underground workings at La Escarcha where they comprise multiphase white quartz and slivers of wall rock which are fracture oxidized. Veins are up to 5 meters wide and contain significant visible gold. Mine staff have reported that gold grades increase downwards from surface to the 60 m level which is currently under limited development. Most gold appears to be free hosted in fractures within quartz and pyrite. 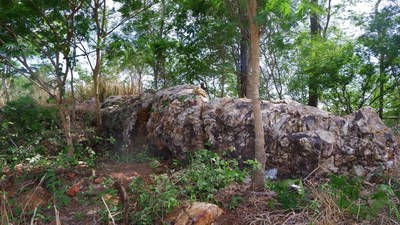 Mantaro Precious Metals Corp. is a British Columbia company that holds a diversified portfolio of gold and silver focused mineral properties in Bolivia and Peru.  The Company's holds an option to acquire up to an 80% interest in the advanced Golden Hill Property ("Golden Hill"), located in the underexplored, orogenic Bolivia Shield, Bolivia.

Information set forth in this news release contains forward-looking statements that are based on assumptions as of the date of this news release. These statements reflect management's current estimates, beliefs, intentions and expectations. They are not guarantees of future performance. The Company cautions that all forward looking statements are inherently uncertain and that actual performance may be affected by a number of material factors, many of which are beyond the Company's control. Such factors include, among other things: risks and uncertainties relating to Company's limited operating history and the need to comply with environmental and governmental regulations. Accordingly, actual and future events, conditions and results may differ materially from the estimates, beliefs, intentions and expectations expressed or implied in the forward looking information. Except as required under applicable securities legislation, the Company undertakes no obligation to publicly update or revise forward-looking information.